As most practitioners in the software area know, it can be a challenge obtaining patent protection for a computer-implemented invention.  However, there are some practices that can greatly enhance your chances of eventually succeeding.  Below are a few things I learned while successfully prosecuting a patent application in statistically the most difficult examination unit, AU3689, and against the statistically most difficult patent examiner in the U.S. Patent & Trademark Office (USPTO) according to several subscription-based software services.

My client is an avid runner and triathlete.  Being somewhat of a data guy, he was curious about wanting to know when his bike tires or running shoes were approaching an unsafe condition so that he could replace them before an accident or injury would occur.  He developed a system with a mobile tracking device that communicated training data live with an online training log where the system provided a warning of an approaching maximum usage, and an alert if the maximum usage was reached.  This was an improvement over conventional systems which stored data locally on the user’s device, and which uploaded data only after completion of a training exercise, by which time the safe usage distance may have already been exceeded for the tires or shoes being tracked.

I filed a patent application in February 2014 with claims to the above-described invention.  The application was eventually assigned to Art Unit 3689, the art unit estimated by some software services as being statistically the hardest art unit in the U.S. Patent & Trademark Office due to its low allowance rate of 7.4%.

In June, 2014, the U.S. Supreme Court issued its Alice decision, significantly altering the landscape for computer-implemented inventions by tightening the patent eligibility standards.

I received a first office action in December 2014 containing, not unsurprisingly given the climate after the Supreme Court’s Alice decision, a patentable subject matter rejection and an obviousness rejection.  Utilizing the then-available USPTO Guidelines, I responded with a claim amendment that provided a little more particularity to the claims, and arguments as to why the subject matter was patentable and inventive.  My arguments focused on the independent claims without going overboard, which is what most practitioners will do when responding to a first office action.  A few months later, the examiner issued a 57-page final office action maintaining the rejections.  I decided to investigate things a little further since the usual practice of providing some key arguments around the independent claims did not seem to be working.  This leads to my first observation.

(1) It helps to do your research on the examiner.

Around this time, I learned about Examiner Ninja, a free service that provided examiner statistics.  (Note, the data on that website does not seem to have been updated since 2014.)  I then learned that my examiner, Examiner McAtee, who at the time he was examining my application, never allowed a single application after many years of examining applications.  Armed with that information, I decided that a Request for Continued Examination (RCE) would not be fruitful, and I proceeded to respond using a different strategy, submitting a 65-page response traversing every ground, backed with the best legal reasoning I could find since I suspected that the matter would head to appeal.  This leads to my second observation.

(2) Using all of the tools and law at your disposal greatly increases your chances.

If you know you are going to appeal against an examiner that will fight you on every ground, you might as well put forward every reasonable argument available.  At the time I prepared my appeal brief, the Federal Circuit’s Enfish decision had not issued.  In fact, my reply brief was submitted only weeks before Enfish and subsequent cases from the Federal Circuit provided more clarity on how computer-implemented inventions could form patentable subject matter.  I relied on the USPTO Guidelines as they existed at the time, and several older cases.  For the obviousness rejections, I utilized several angles of argument, including non-analogous art (one of the four references dealt with an automobile speedometer from 1939), and impermissible hindsight reasoning.  As most experienced practitioners will tell you, the impermissible hindsight argument often gets the standard form paragraph from the examiner in return that basically states that “it must be recognized that any judgement on obviousness is in a sense necessarily a reconstruction based upon hindsight reasoning.”  Using the impermissible hindsight argument rarely wins the day.

After waiting a little over two years, in July 2018, the Patent Trial and Appeal Board (PTAB) handed down its decision reversing the examiner on every ground.  The PTAB even held that there was impermissible hindsight reasoning, therefore confirming that such a rebuttal is not always a fruitless endeavour.

At the time the PTAB handed down its decision, Examiner McAtee had an allowance rate of 0.8% according to subscription service Patent Advisor (having allowed a single application in the time since the filing of my reply brief in April 2016).  According to Juristat (another subscription service), Examiner McAtee had the well-deserved reputation of being tied for the hardest patent examiner in the U.S. Patent & Trademark Office (out of over 8,300 patent examiners).

Other things became apparent from the PTAB decision, leading to my third observation. 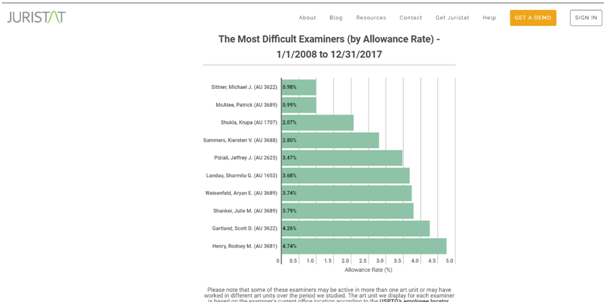 (3) In the current climate of software patentability you need to consider how the invention improves computer aspects, and make sure you claim with a degree of particularity.

In reviewing the Board’s remarks, several things were apparent.  First, clearly explaining how a system is improved is beneficial.  Secondly, claiming with a degree of particularity is important.  I filed the original claims in February 2014.  Alice was handed down four months later, causing a massive change in the practice at the U.S. Patent & Trademark Office.  With the climate for software inventions being changed by the law so much, a revision in practice was needed.  The old accepted practice was to claim broadly using rather generic terms and computer implementations.  After Alice, it became clear that in order to claim a computer-implemented invention, the practice would have to change.  I decided to amend the claims with more particularity.

(4) It helps to have an applicant with the resources and tenacity to see it to the end.

Many clients have extremely limited budgets, or very short timeframes.  When you are against a more difficult examiner, both factors work against the applicant.  Fortunately, my client had the budget to afford the attorney time needed to put forth the required effort, and his timetable was flexible.  This is because I was the client!  Very rarely do patent attorneys file applications for their own inventions.  I am usually too busy assisting others with obtaining intellectual property protection for their own inventions.  However, I am also an avid runner and triathlete, and developed an invention that solved a problem I faced often.

We are pleased to announce our re-branding as Southern Cross Intellectual Property (SCIP).  Our name was intentionally chosen to represent s

It has been a difficult 15 months for many around the world. Last month, a “travel bubble” opened between Australia and New Zealand.

How I beat the toughest patent examiner at the U.S. Patent & Trademark Office

As most practitioners in the software area know, it can be a challenge obtaining patent protection for a computer-implemented invention.  However, there are some practices that can greatly enhance your chances of eventually succeeding.  Below are a few things I learned while successfully prosecut